Who’s Behind the Tea Party?

On Thursday, September 16, 2010, I heard a very interesting discussion about the Tea Party movement on NPR. Click here to listen to it yourself.

In the segment, Morning Edition anchor Steve Inskeep talked with two supporters of the Tea Party about what the movement stands for, and he got two very different responses.

Ms. Toby Marie Walker, lead facilitator for the Waco Tea Party, believes the Tea Party movement should focus on fiscal responsibility in government. TEA supposedly stands for Taxed Enough Already, so one could infer that the Tea Party’s primary purpose is to reduce taxes and control spending in the national government. Ms. Walker seemed to think that was the most important issue for Tea Party supporters to focus on. 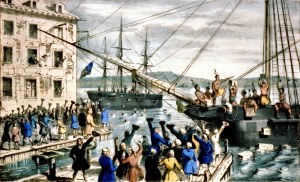 The original tea party, you may recall, was an action taken in 1773 by colonists in Boston who resented paying taxes to the British government. Remember the slogan from the Revolutionary War, “No taxation without representation”?

According to Wikipedia, the current movement began when Graham Makohoniuk made a post online suggesting that people mail a tea bag to Congressfolk who voted in favor of a federal government bailout intended to keep the shaken economy from completely collapsing.

From that simple suggestion grew a movement that now boasts several national organizations or coalitions that promote local chapters and events. In some cases, they are also pushing the agendas of particular parties or politicians. That’s my opinion based on the little bit I’ve heard about the organization and what I’ve been reading today on their websites.

The media continues to refer to the Tea Party as a grassroots movement, but I believe it’s grown beyond that. One example: the California-based Tea Party Express was founded by a political action committee run by Republicans, a fact I found in an article on Salon.com.

The Tea Party Express website doesn’t say anything about who runs the organization. Neither does the Tea Party Patriots website. It disturbs me when a website (political or otherwise) doesn’t say who is behind it. Is it run by paid staff members or volunteers? Where are these people located? How can organizers (paid or volunteer) be reached, outside of filling out a generic contact form on the site?

This kind of identity opaqueness is a red flag for me.

Moving on, the Tea Party organizations that name their intentions all seem to focus on the same issues. Here’s one national organization’s mission statement, as presented on http://www.teapartypatriots.org: “The impetus for the Tea Party movement is excessive government spending and taxation. Our mission is to attract, educate, organize, and mobilize our fellow citizens to secure public policy consistent with our three core values of Fiscal Responsibility, Constitutionally Limited Government and Free Markets.”

This brings me to the other guest on NPR, the American Family Association’s Bryan Fischer. He says the Tea Party should stand for everything that the Founding Fathers set down in the Constitution. In his mind, the phrase pledging “that among these rights are life, liberty and the pursuit of happiness” means the Founding Fathers were against abortion and gay marriage.

Oh, but wait. That’s not from the Constitution. That’s from a different document, the Declaration of Independence. If the phrase were in the Constitution, or if one chooses to include the Declaration as part of the Constitution for some reason, I could see how someone could use the right-to-life phrase as an argument against abortion, even though, “In early post-Revolution America, abortion, at least early in pregnancy, was neither prohibited nor uncommon.” That’s from Constitutional Law professor Lawrence Tribe’s book, “Abortion: The Clash of Absolutes.” It seems to me that granting the rights to “life, liberty and the pursuit of happiness” would do more to support the legality of gay marriage. Shouldn’t any American have the freedom to pursue happiness by marrying whomever he or she pleases?

I believe that the grassroots beginnings of the Tea Party movement allowed common citizens to express their opinions on the proposed corporate bailout to their elected representatives. The Tea Party name has now been adopted by fundamentalist right-wing extremists who are surreptitiously using it to pretend a more wide-spread adoption of the same rhetoric they’ve been spouting for years.

The religious right and the Republican Party have the right to believe and say whatever they want. That right is guaranteed in the U.S. Constitution, Amendment 1. However, they should do that openly, not in secret behind the name of a true grassroots movement that has now, by and large, become a tool for political deception.

When I grow up, I want to make movies and write books. Now in my 50s, I wonder if I'll ever really accomplish the dreams of my youth. I have made two short films, one for a college film-making class, the other for an MTV-sponsored contest. I have written short plays that have been produced, and a few short stories and reviews that have been published. I also perform and direct for community theatre. My working life has included stints in local TV news, public relations, retail management and cashier, and for a couple of years, I made the rides go at Walt Disney World. I have two cats and a husband.
View all posts by Taminar →
This entry was posted in Uncategorized. Bookmark the permalink.

2 Responses to Who’s Behind the Tea Party?