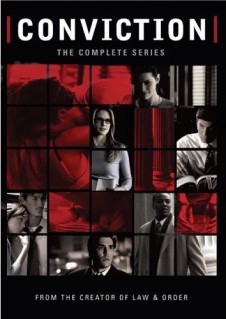 Several months, maybe a year ago, we acquired Conviction: The Complete Series on DVD. We watched the first four or five episodes and kind of lost interest. We were not compelled to continue watching, until this week.

The series focuses on a team of young attorneys working for the state prosecutor’s office in New York. The boss is ADA Alexandra Cabot, who was a regular character on the original Law and Order series, and L&O creator Dick Wolf also created this series. In the first three Law and Order series. each episode focuses on one case, maybe two. With Conviction, each episode covers three or four cases, so you only see a few minutes of any one storyline.  In addition, the first few episodes seemed to focus more on the attorneys’ private lives and sexual escapades than on the cases. What Tim and I like about the other Law and Order series is that we can follow along on the investigation and prosecution, discuss various legal procedures, agree or disagree with how a case is handled, and see if we were right about who committed the crime. Conviction didn’t give us enough of that.

After several months of not watching, we decided to finish watching the series this week. We weren’t sure where we stopped, so we ended up missing a few episodes in the middle and watching those out of order. The show actually got a lot better as it went along. We still had some personal drama, but it didn’t seem to detract as much from the cases. They had some interesting cases that we didn’t always agree on. Here’s an example:

In one episode a young gang member had disappeared after his arrest for selling drugs. The other gang members involved had all been prosecuted. They finally nab this last guy, but it turns out he has joined the Navy, and his defense attorney asks for leniency. The prosecutor originally assigned to the case has passed it off to Nick Potter, one of the new guys in the office, and she wants the kid to go to prison. Potter wants to give him a break; the kid is due to ship out to Iraq in a few months, and his CO says he’s an outstanding sailor.  Unfortunately, ADA Cabot agrees with the case’s original prosecutor. It’s a gang crime and he needs to be punished. The drug conviction is a felony and he’ll have to serve a year in prison, meaning his Navy career is over. I agreed with Potter. The drug sale (two ounces of crack cocaine) was not a violent crime. The kid seemed genuinely glad to have found a legitimate career that makes his mother proud. Prisons are overcrowded, and in my mind, service in Iraq is just as good a rehabilitative tool as a year in prison. When he gets out of prison, he’ll turn back to his life of crime because he won’t have a job and he’ll be bitter. My husband says the kid probably committed violent crimes before, even if he didn’t get caught, because that’s what gangs do, and he should be punished. He also said that he’d probably be one of those service members who turn the gun on his own troops or who’ll come home more violent than ever. I can see his point, but from the information I had to go with, I would have given the kid the benefit of the doubt.

If you like the other Law and Order series, you will probably enjoy this one as well. If you don’t get into the first couple of episodes, just give it time and allow it to develop. In the beginning, I thought I could see why the show didn’t get picked up past the first season. By the end, though, I felt like it had gotten a raw deal, and I was really disappointed not to be able to see what happened to these characters in the future.

You can watch full episodes of Conviction on Hulu. The complete series is also available for purchase at Amazon.

When I grow up, I want to make movies and write books. Now in my 50s, I wonder if I'll ever really accomplish the dreams of my youth. I have made two short films, one for a college film-making class, the other for an MTV-sponsored contest. I have written short plays that have been produced, and a few short stories and reviews that have been published. I also perform and direct for community theatre. My working life has included stints in local TV news, public relations, retail management and cashier, and for a couple of years, I made the rides go at Walt Disney World. I have two cats and a husband.
View all posts by Taminar →
This entry was posted in DVD Reviews, Entertainment, Reviews, Television. Bookmark the permalink.