The Wine that Time Forgot

Drink no longer water, but use a little wine for thy stomach’s sake and thine often infirmities.
1 Timothy, 5:23 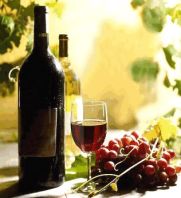 In the 21st century, you might hear a doctor recommend drinking a glass of red wine to help prevent cancer. 3,500 years ago or so, the people who transcribed the Word of God included the above admonition to to drink a little wine for what ails you. But when exactly was wine invented? Recent archaeological discoveries suggest wine-making was going on more than 7,000 years ago!

How did scientists reach that conclusion?

Archaeological chemist Patrick E. McGovern examined the chemical residue found in ancient jars found at a 7,400 year old site in northwestern Iran and identified it as wine.  Basically, they found someone’s wine cellar, pantry or recycle bin. So, they know wine was around that long ago, but they still didn’t know who was making the wine or exactly how.

A multinational team of scientists this week announced the discovery of what McGovern calls, “the earliest winemaking facility that’s ever been found.” It’s about 6,100 years old.

The winemaking operation was found in an Armenian cave, covered in sheep poo which, for whatever reason, helped preserve the artifacts. Scientists located grape seeds, dried pressed grapes, stems and shriveled grapevines along with the tools of the trade: a vat for fermenting, storage jars, a clay bowl and horn drinking cup. I guess they needed to test the quality of the product. The archaeology team also found a shallow, thick-rimmed clay basin they believe was used for stomping the grapes. The basin was positioned so that the grape juice would flow into the two-foot-deep fermentation vat. Pretty clever, huh.

Elsewhere in the cave, the science team found a burial site where the bones of several people, from children to old men were stored in ceramic vessels. Co-director of the excavation, Dr. Gregory Areshian, believes the wine made in the cave was used in death or mourning rituals.

One of the next steps for this find is, according to Dr. Areshian, “a very extensive DNA analysis of the grape seeds” from the cave. He also says that botanists connected with the find are eager to plant some of the grape seeds and see what grows.

When I grow up, I want to make movies and write books. Now in my 50s, I wonder if I'll ever really accomplish the dreams of my youth. I have made two short films, one for a college film-making class, the other for an MTV-sponsored contest. I have written short plays that have been produced, and a few short stories and reviews that have been published. I also perform and direct for community theatre. My working life has included stints in local TV news, public relations, retail management and cashier, and for a couple of years, I made the rides go at Walt Disney World. I have two cats and a husband.
View all posts by Taminar →
This entry was posted in Social Commentary, Technology and tagged archaeology, history, wine. Bookmark the permalink.