>A few months ago, Billboard celebrated what would have been John Lennon’s 70th birthday with a special section. 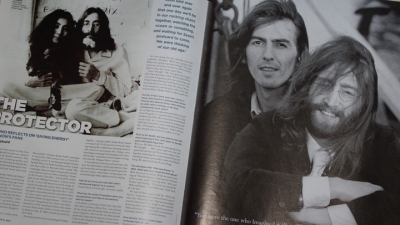 Along with eight pages of editorial content – including an interview with Yoko Ono and a preview of several album re-releases – the issue contains a number of full page tribute advertisements.

I don’t know why I’m receiving Billboard; I figure I must have won it in a sweepstakes. I don’t usually hold onto them, but I felt this issue was special.

I like the Beatles, but I wouldn’t really call myself a fan; a true fan would be able to name all their albums, know all their music and their history, and I just like hearing it on the radio. So, rather than keeping this issue any longer, I decided to give it away to someone who will appreciate it more.

Comment on this post with the title of your favorite song by the Beatles or John Lennon.

No, your favorite song by Wings or the Traveling Wilburys doesn’t count.

If your email is not visible on your GFC profile, please leave it in your comment.

EXTRA ENTRIES: For each item you complete, leave another comment here and be sure to include a link to your comments and tweets.

You can earn a maximum of seven entries per household. Eligible comments must be made no later than 11:59pm ET on April 8, 2011. Entrants must be 18 or older, with shipping addresses in the United States or military APO/FPO addresses. One winner will be selected by random drawing no later than April 10 and notified by email. Winner must respond to the email with mailing address within 72 hours or another winner will be selected. The magazine will be packaged and sent media mail.

When I grow up, I want to make movies and write books. Now in my 50s, I wonder if I'll ever really accomplish the dreams of my youth. I have made two short films, one for a college film-making class, the other for an MTV-sponsored contest. I have written short plays that have been produced, and a few short stories and reviews that have been published. I also perform and direct for community theatre. My working life has included stints in local TV news, public relations, retail management and cashier, and for a couple of years, I made the rides go at Walt Disney World. I have two cats and a husband.
View all posts by Taminar →
This entry was posted in Giveaways and tagged Beatles, giveaway, Lennon. Bookmark the permalink.