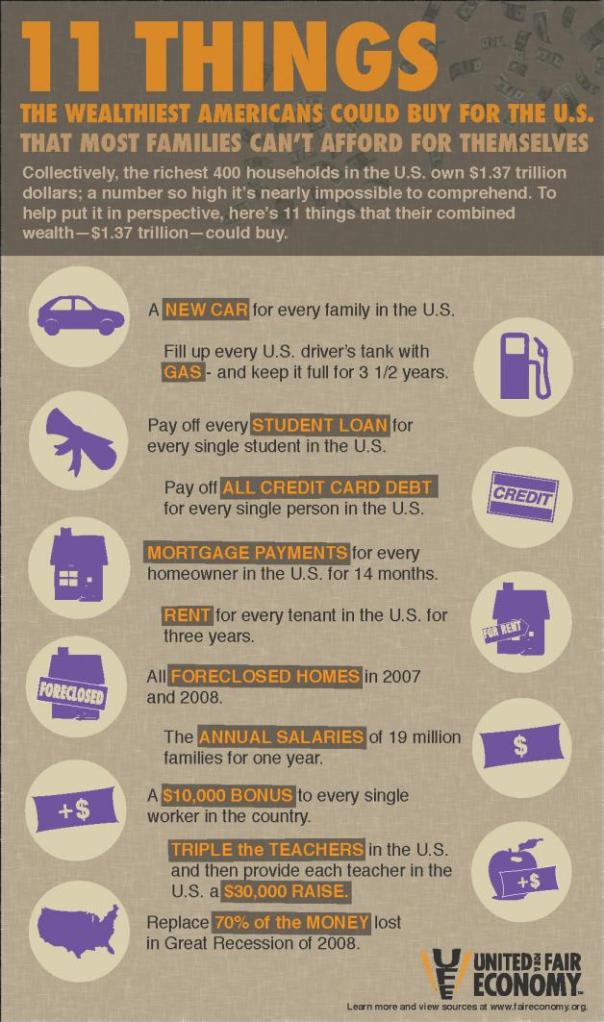 This graphic started it all. I was checking out Google+ and someone in my small circle of friends posted it and asked for thoughts. Here is my response:

This is why I wish the very wealthy would just suck it up and pay the same tax rate as the lower middle class. Or maybe the upper lower class. Sure, every 1% of their income is far more than every 1% of my income. But considering that in the 1960s, the tax on incomes of $400,000 or more was at 90%, and considering that the uber-rich today pay an average of just 17% (From Forbes), the whole country would be better off if they paid their fair share and the uber-rich wouldn’t even miss the money.

So then my friend said, “You always miss the money.” I continued:

Now on the surface, that sounds like a lot of money. At least it does to those of us who would need a good five or six months to earn that kind of cash. But consider….

That hypothetical average person is still bringing home $119,112 and change every day. This is personal income. $119,000 a day, after taxes. Sure, these are the sorts of people who fly to Paris for the weekend to pick out a dress for a charity ball, so maybe they think they really “need” that extra $14,721 per day.

Contrast that with the person earning $25,000 to $29,999 per year. Eight million people whose adjusted gross income fell within that range paid taxes at the 10% rate. If they fall smack dab in the middle and gross $27,500, and paid exactly 10%, their total tax liability for the year is $2,750 or $7.51 per day. That’s at least one meal. Maybe two if you eat someplace cheap or have a coupon. If you’re frugal, you could feed dinner to a family of four on $7.51. It wouldn’t be a gourmet meal, but if you’re living on $2,000 a month, and paying for a place to live, transportation, meals, water, electricity and a basic land line phone, you can’t afford gourmet anyway.

I’m certainly not saying that poor people don’t fritter away some of their income just like the rich people. I’m just saying in the scheme of things, who’s going to miss that 10% of their income the most?

When I grow up, I want to make movies and write books. Now in my 50s, I wonder if I'll ever really accomplish the dreams of my youth. I have made two short films, one for a college film-making class, the other for an MTV-sponsored contest. I have written short plays that have been produced, and a few short stories and reviews that have been published. I also perform and direct for community theatre. My working life has included stints in local TV news, public relations, retail management and cashier, and for a couple of years, I made the rides go at Walt Disney World. I have two cats and a husband.
View all posts by Taminar →
This entry was posted in Government, Social Commentary and tagged income tax, national debt. Bookmark the permalink.