If you follow my blog or my Twitter account, you know I’m a longtime fan of the Star Wars saga. In 1987, at the 10th anniversary convention in Los Angeles, I learned about an unofficial club called Forces of the Empire. I eventually joined and became an active member for several years. 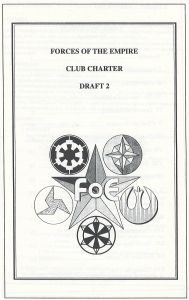 The club’s focus was on continuing the adventures through fiction and (occasionally) live action role-playing. Members lived all over the world, so even when we did have our annual get-together at MediaWest*Con in Lansing, Michigan, not all the members could be there.

I created several characters. Jazz Calbison is a pilot in the Rebel Alliance who finds out she has the Force, turns to the Dark Side, then gets turned back to the Light. RoAsha Br’yl-Castan is a diplomat from the planet Shandalay. Arani Adja is an Imperial officer. Qasimir Rave is a mercenary.  Corian Aca is a Sith.

Recently, I was going through a huge file of club-related paperwork, and I came across a series of interconnected stories. They involve several of my characters. These would have been written around 1993, as they also include characters (Shockeye and Aslan) developed for my then-brand-new husband to play at MediaWest*Con.

When my Imperial officer earned a promotion, I received this certificate.

These stories are mostly set-up for what was supposed to be a very involved storyline. Life got in the way and I ended up dropping out of FOE, but I think you’ll be able to see where they’re going. It took a few minutes to decide what would be the best reading order. “Maris Veramor” is first, because it takes place during the Jedi purge (remember, these stories were written pre-prequels and well before “Order 66”). The others all take place about ten years after Return of the Jedi. They’re PDFs, so this will take you to another page, where you have to click again to view.

Remember, these were written nearly several years before the prequels and 22 years before The Force Awakens (dang, I’m old). I do have a mention of Coruscant; that planet was established in the then-new Timothy Zahn novel “Heir to the Empire.”

I hope you enjoy reading the stories, and I look forward to hearing what you think of them.

When I grow up, I want to make movies and write books. Now in my 50s, I wonder if I'll ever really accomplish the dreams of my youth. I have made two short films, one for a college film-making class, the other for an MTV-sponsored contest. I have written short plays that have been produced, and a few short stories and reviews that have been published. I also perform and direct for community theatre. My working life has included stints in local TV news, public relations, retail management and cashier, and for a couple of years, I made the rides go at Walt Disney World. I have two cats and a husband.
View all posts by Taminar →
This entry was posted in Entertainment, Film, Star Wars and tagged fan fiction, Jedi, Sith, star wars. Bookmark the permalink.