That time my mother saw a murder-suicide

I must have been in high school when my mother first told me.

“It just occurred to me that I witnessed a murder-suicide,” she said.

A. She’d never mentioned this before. B. When did this happen? C. Who? D. Where? E. And why is this just now occurring to you?

Fast-forward to 1986, and I was a passenger in my friend’s car when she got in a wreck, and I hit my head, and I couldn’t remember exactly what happened, and after a few weeks it occurred to me that I had amnesia. Which made it cool. But still, that was weeks, not decades!

So, recently, I’ve been using a subscription to Newspapers.com to look up articles and obituaries related to my genealogy research, and it occurred to me that I could try to find an article about this murder-suicide that my mother saw when she was in elementary school. I remembered her saying that she was with her mother and they were outside Sears in Pensacola.

Of course, I never think of this when it’s a decent hour to call my mom and verify the details or get anything extra that I may have forgotten. I went through pages and pages of the Pensacola News Journal from the 1940s before I found it.

Newspapers.com doesn’t have the Wednesday evening edition, so the earliest headline I found was on Thanksgiving morning, 1946. Weirdly, the article itself was torn out of the paper that was scanned. I presume it continued on page 10, because a small piece is torn out of that page as well.

I found a follow-up article published on Friday. 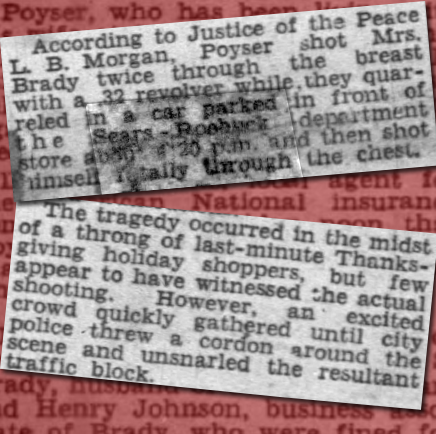 The story in the paper differs from what my mother remembers.

When I told my mother I’d found the article, she described to me her memory of that day. She and her mother were walking along Palafox Street near Sears. My mom saw a man walk out of Sears and go directly to a car parked on the street. He fired several shots into the car, then walked around the front of the car.

The woman got out of the car and ran across the sidewalk. She collapsed in the doorway of Sears.

The man shot himself in the car.

My mom thought at first he’d thrown firecrackers into the car. When they found out what happened, she says her mother commented that she’d thought it was firecrackers. They did not stop, but kept walking down the street.

Of course, my mam-ma is many years gone now. I wonder if she was protecting her child by trying to get her out of whatever disturbance was happening. Did she really think it was firecrackers? Especially when the woman collapsed in front of them on the street?

The man was Leo Poyser. My mom says his wife and children attended Richards Memorial Methodist Church, where my mom and her family went. She didn’t remember if Mr. Poyser ever attended with them.

The woman was Florence Brady. Her daughter Winifred was in my mom’s class at Brentwood School.

My mother went to school with Winifred Brady.

It’s a salacious story. Reading between the lines, it appears Mr. Poyser and Mrs. Brady may have had an affair. According to these articles, Mr. Poyser had lived apart from his family for a while, and during that time, Mr. Brady and a friend went to Mr. Poyser’s trailer and fired several shots inside. They were arrested for attempted murder but made a plea deal to lesser charges.

Had Mrs. Brady and Mr. Poyser agreed to meet outside the Sears that day? The way my mom describes it, Mr. Poyser made a beeline to the car. He knew she was there. Her daughter was nearby; did he know Winifred wasn’t in the car when he started shooting?

Mom had said, even the first time she told me this story, that none of the kids at school ever bothered Winifred about this.

I asked my mom how she knew for sure that no one ever said anything to Winifred. She said, “I would have seen her crying.” But of course, we can’t know that. She may not have been the kind of child who cried, or maybe she was all cried out. I would like to think that my mom is right, and that the children in that school were a little more considerate or empathetic than children today.

I don’t have the impression that my mother was traumatized by what happened. Maybe that’s because it all happened so fast, and there was clearly a delay of a day or two until she found out that the woman was shot and that the last bang she heard was a man killing himself. But it definitely is a moment that has stayed with her for more than 72 years.

When I grow up, I want to make movies and write books. Now in my 50s, I wonder if I'll ever really accomplish the dreams of my youth. I have made two short films, one for a college film-making class, the other for an MTV-sponsored contest. I have written short plays that have been produced, and a few short stories and reviews that have been published. I also perform and direct for community theatre. My working life has included stints in local TV news, public relations, retail management and cashier, and for a couple of years, I made the rides go at Walt Disney World. I have two cats and a husband.
View all posts by Taminar →
This entry was posted in Genealogy, My Life, Pensacola, Social Commentary and tagged murder, Pensacola, suicide. Bookmark the permalink.

4 Responses to That time my mother saw a murder-suicide