I can’t say that I have “a favorite photo.” I have pictures of myself that I like. In my scanning of family photos, I have found many that I love. Nothing stands out as a “favorite of all.”

I’ve been thinking about this for several days, since the #52 Ancestors in 52 Weeks topic was announced for this second week of January, 2020. I sat down to write something Friday morning, but my time was limited, and I just couldn’t decide on the picture.

So, I thought some more.

And this picture kept coming to mind. It was taken during a Christmas gathering at my mother’s parents’ house in Midway, which is an unincorporated community near Navarre in Northwest Florida. The area was also known as Lagniappe (læn’-nee-app) Beach. 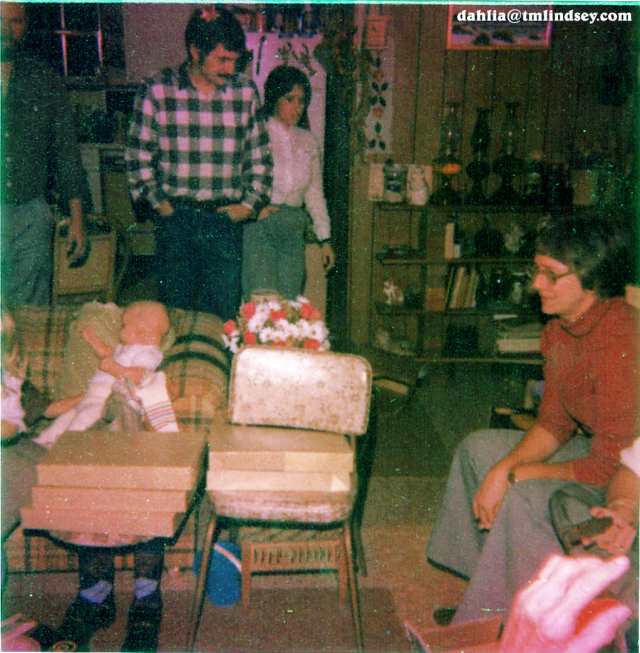 No, it’s not the best photo in the world. The people are blurry. It was dark. I’ve brightened it up and used the color correction tool in Photoshop, but it’s still hard to make things out. And it’s not framed well — that’s half of my Uncle Aldis in the upper left. That looks like Mam-ma’s hand in the lower right, and I don’t know whose arm that is with the white sleeve. That’s my mom in the red top.

What makes it special is what I can see because I know what it is. On those shelves in the back, on the left side you can see a ceramic cat, painted white and ginger. Below that cat is another cat, a plain gray finish to the figure as I recall. On the top shelf are some of Mam-ma’s – Willie Stevens Cook’s – hurricane lamps. On the bottom shelf – it just looks like a black blob to you – is a miniature wood-burning stove with all the little pots and pans. We were allowed to play with that, and the Tinker Toys and Pick Up Sticks that always stayed on those shelves as well. You may be able to tell that the shelves themselves were boards with bricks stacked in between.

Above the shelves, on the wall, see that light-colored vertical banner with the design? Those are fabric holly leaves and berries, cut out and glued on. I remember my mom and I making those.

In the far back, behind me and my Uncle Howitt, is the kitchen. On top of the cabinets (you can’t see them in this photo) is Mam-ma’s collection of pitchers. Behind Aldis’ hand, you can make out one of the bamboo swivel chairs that sat at the bar. I sat there many a time having oatmeal or Mam-ma’s good homemade soup or fried mullet or chicken baked with cream of chicken soup and biscuits.

On the sofa, holding a doll, you can just see some blonde hair. That must be my cousin Wendy, Aldis’ youngest child at the time. She passed away a few years ago in a terrible car wreck that also claimed the life of one of her young sons. I wish I could see her face in this picture.

Down left is the “foot stool,” a gag gift for Pap-pa (Dewey Hoyt Cook). I don’t know if we gave it to him that year or a previous year. A pair of men’s shoes and socks are stuffed and shaped around the two legs of the stool. The top is padded with, I believe, a brownish plaid fabric.

Another thing you can’t see, and I can’t imagine how they didn’t make it into this picture, were the brown paper grocery sacks, a staple of Christmas at the Cook house. Mam-ma filled a sack for each of her children and grandchildren, our names written in marker on the outside. They’d contain small toys, a washcloth with a crocheted ruffle of embroidery thread, or hangers covered with yarn. We each took our turn opening the bag and showing everyone what was inside. Sometimes – to laughter and ribbing – there would be a stick of Tussy deodorant or a bar of soap. It was a little embarrassing to hear the jokes, “You must smell bad!” but we knew we’d be turning it around on the others when they opened their bags.

My dad was in the Navy, so there were many years that we were in another state or another country at Christmastime. When we were in town, we would split our time with my other grandparents as well. Mam-ma and Pap-pa often had their Christmas dinner and gift exchange on a day other than December 25th. I remember very rarely having lunch with one set of grandparents and dinner with another, but that might have been Thanksgiving.  Still, those big family dinners with so much good food, playing with cousins, hugs and happiness, were rare enough to be a treat far beyond the annual occurrence of Christmas.

So, this isn’t necessarily my “favorite” picture, and it’s certainly not the best photo, but it’s a snapshot of those extra-special holidays spent with my extended family.

When I grow up, I want to make movies and write books. Now in my 50s, I wonder if I'll ever really accomplish the dreams of my youth. I have made two short films, one for a college film-making class, the other for an MTV-sponsored contest. I have written short plays that have been produced, and a few short stories and reviews that have been published. I also perform and direct for community theatre. My working life has included stints in local TV news, public relations, retail management and cashier, and for a couple of years, I made the rides go at Walt Disney World. I have two cats and a husband.
View all posts by Taminar →
This entry was posted in Genealogy, My Life, Pensacola and tagged Christmas, family, Holidays, Memories, Thanksgiving. Bookmark the permalink.