The first thing I thought of when I saw the prompt for this week’s #52Ancestors challenge was the Bureau of Land Management’s General Land Office. I have searched several ancestors on that site and found some interesting information. I need to order the files on some of them. I see inspiring stories about how other people received huge packages filled with family history, but I’m afraid that I’ll pay the fees and end up with a letter that says, “Sorry, we couldn’t find anything.”

Here is the landowner at the top of my list, if I never get up the courage to order.

Very little is known about my husband’s great-great grandmother Laura M. Price. Someone on FamilySearch listed her husband as Joe Price, but there are no records attached to him, his wife, or his children that confirm that.

According to the 1900 U.S. Census, Laura was born in New York in February 1830. It says both her parents were born in New York, but I have found no other information on who they were. Her maiden name is unknown. She sometimes uses the middle initial “M” and her oldest son is named Merrick, so I think that might be her maiden name, but I’ve found nothing to corroborate that. Merrick sometimes uses the middle initial “D” and one of his younger brother’s middle names is DeForest, so that’s another maiden name possibility.

The earliest record I have for her is the 1870 U.S. Census. It lists her and her four children living with a farmer, William Carter, in Jobe, Oregon County, Missouri. Laura is listed as a housekeeper.

In 1880, the U.S. Census has her living in Eminence, Shannon County, Missouri. Again, she is listed as a housekeeper, this time for clergyman James P. Creager.

In 1889, she received a land grant in Missouri. The map shows it right outside Winona, where my father-in-law grew up. 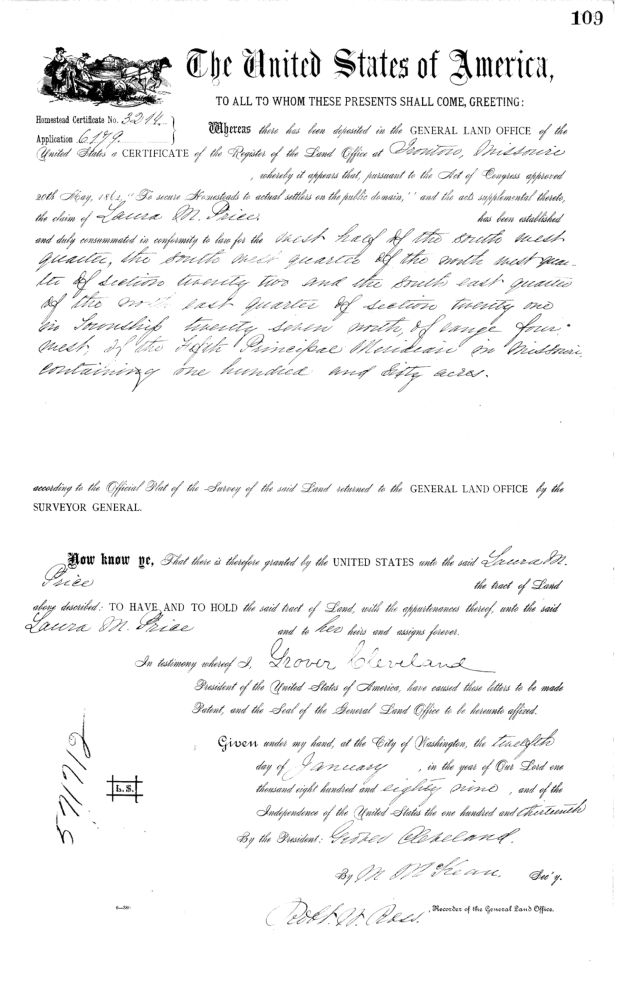 In 1900, the U.S. Census shows her living with her youngest son, C.L. DeForest Price in Birch Tree, Missouri, which is also close to the land grant on the map. I wonder if they were still living on those lands, but on the side closer to Birch Tree.

I would really like to know who her family is and how she came to receive this land grant. Laura is a mystery and one of the brick walls on my husband’s family tree.

When I grow up, I want to make movies and write books. Now in my 50s, I wonder if I'll ever really accomplish the dreams of my youth. I have made two short films, one for a college film-making class, the other for an MTV-sponsored contest. I have written short plays that have been produced, and a few short stories and reviews that have been published. I also perform and direct for community theatre. My working life has included stints in local TV news, public relations, retail management and cashier, and for a couple of years, I made the rides go at Walt Disney World. I have two cats and a husband.
View all posts by Taminar →
This entry was posted in Genealogy, My Life and tagged family history, Missouri, price, Shannon County. Bookmark the permalink.