I am uncertain about the identity of my great-great-great grandfather Silcox.

Note: Or at least I was uncertain when I wrote this. When you get to the bottom, you’ll find I’ve added an update.

Here’s what I do know:

My dad’s mother was Malzie Elizabeth Silcox, born in 1919 to Annie Olive Givens. Most of the records say she was born in Alabama, but there’s a Register for Births in Baldwin County that gives her place of birth as Muscogee, Florida.

Her parents were Henry David Silcox, known as Dave, and Annie Olive Givens. Annie was Dave’s second wife; she was 17 when Malzie was born. He had just turned 34. 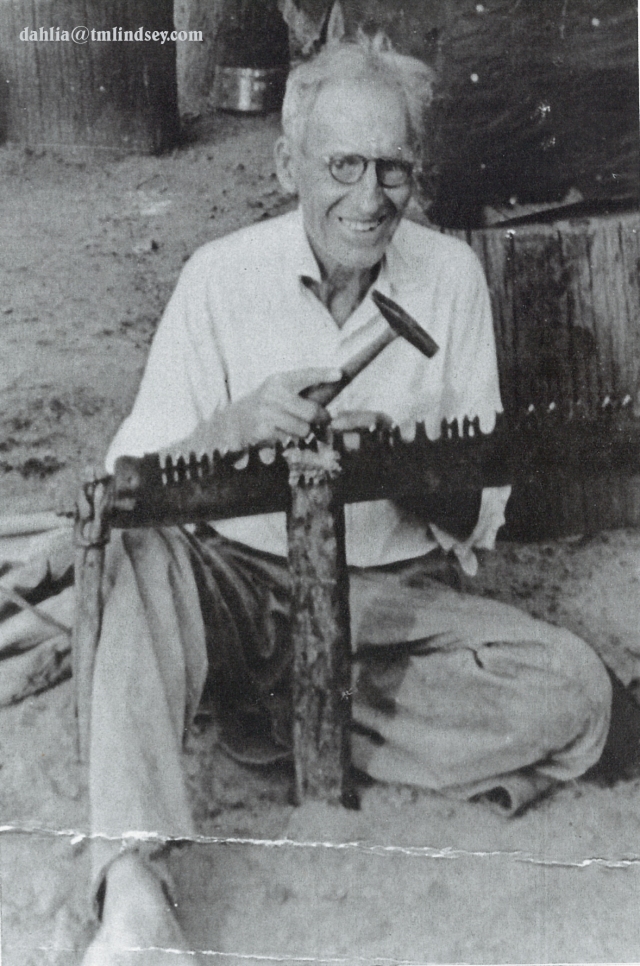 Dave was the son of William Hampton Silcox and Dorithea Duck. Dave’s daughters confirmed for me, in person, that Hampton was their grandfather’s middle name. Some family trees list it as Henry. His wife, they say, was called “Drathy.” 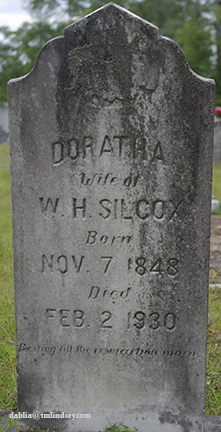 All good so far.

But, who are William Hampton Silcox’s parents?

His death certificate gives his father’s name as “Jno Silcox” with mother’s name unknown. The informant was “James Gullege.” James Gulledge was the husband of William and Drathy’s daughter Mary Anna. We have no way of knowing whether he had ever met his wife’s grandparents or if he was just trying his best to remember what he’d heard.

William Hampton Silcox was born – according to the 1900 Census – in October 1845. His tombstone gives a birthdate of 22 October 1844, but the stone itself is much newer than his wife’s, next to it. It’s a military service-related stone, and until I find the record of its order, I have no way of knowing who supplied that information.

There’s a William Silcox of the right age in the 1850 Census. He’s living with 50-year-old “Mrs. Silcox” (Thanks a lot, Mr. Census Taker). There are four other children in the home, Jessie, age 20; Martha, 18; Benjamin, 14; and Burnetta, 9. They were living in Santa Rosa County, Florida.

In 1860, we find what appears to be the same family living in Walton County, Florida. “Sarah Sylcox” – age 66 now – is the head of household. The three other people in the household are William, age 15; Bernette Moores, 18; and William Moores, age 23.

In 1880, we find “Henry Silcox” and his wife “Doratha” living in Escambia County, Florida. All the children are right for William Hampton Silcox. His birthplace is given as Florida; his parents’ birthplaces are left blank.

In 1900, William and Dorathy are living in Baldwin County, Alabama, with their younger children. Again, his birthplace is given as Florida, and parents’ birthplaces are marked unknown.

It’s not until 1910 that a U.S. Census gives a place of birth for William’s parents. It’s South Carolina for both.

The 1900 Census does offer a couple of clues about possible family relationships. On the same page, we find John W. Silcox, born 1847. He’s the right age to be William’s brother, but there’s no mention of a John in those two previous census records. Is John a cousin? Or do I have the wrong parents?

Recently, someone came along on FamilySearch and listed Wade Warren Silcox as the father of William Hampton Silcox.

Wade has just two sources attached to his profile – an 1840 Census, which shows him living in Escambia County, of the Florida territory. There appear to be six males and three females in the household.

The other source is an index card indicating that Private Wade W. Silcocks was a member of Kelly’s Company, Florida Volunteers (Mexican War).

Could Mary Sarah Pitts be the Sarah Sylcox?According to the 1840 census, the oldest woman in the household was between 20 and 30, which would have put Sarah between 30 and 40 in 1850, and between 40 and 50 and 1860. So the ages don’t add up, but we know those census form ages can vary quite a bit from reality.

The ages of Jessie and Benjamin in the 1850 Census are right to be Wade’s children, as listed in this unresearched profile. There’s a discrepancy with Martha’s age. If Martha Patricia was born in 1838, she would have been 12 in 1850, not 18. And where’s Burnetta?

So, I’m uncertain who William H. Silcox’s parents are. His mother appears to be a woman named Sarah, but are Mary Sarah Pitts and Sarah Sylcox the same woman?

It’s possible a couple of good DNA matches could shed some light on this except that it’s very possible that all these Silcoxes are related in any case. There are also intermarriages amongst the small population of Northwest Florida and South Alabama in the 1800s that would make confirmation difficult.

If you’re reading this because you’re researching the Silcox family, I would love to hear from you! Please leave a message below.

52 Ancestors in 52 Weeks is a challenge created by genealogist Amy Johnson Crow to encourage family historians to write about their own history, their discoveries, and their brick walls. It’s open to anyone who wants to participate.

While going through the profiles on FamilySearch to write this post, I messaged a woman who had made some changes. I never hold out much hope. Oftentimes, the person never responds, or if they do, they don’t remember why they happened to be on that profile that day and made that particular change. This time, I hit the jackpot. She has some connections to the Silcox family in her tree and has been including them in her research for more than three decades. She emailed me detailed Family Group Sheets that include an amazing array of sources. So, I am uncertain no more! Well, on this particular family anyway.

When I grow up, I want to make movies and write books. Now in my 50s, I wonder if I'll ever really accomplish the dreams of my youth. I have made two short films, one for a college film-making class, the other for an MTV-sponsored contest. I have written short plays that have been produced, and a few short stories and reviews that have been published. I also perform and direct for community theatre. My working life has included stints in local TV news, public relations, retail management and cashier, and for a couple of years, I made the rides go at Walt Disney World. I have two cats and a husband.
View all posts by Taminar →
This entry was posted in Genealogy, Pensacola and tagged Alabama, Baldwin County, Duck, family history, Florida, Silcox. Bookmark the permalink.