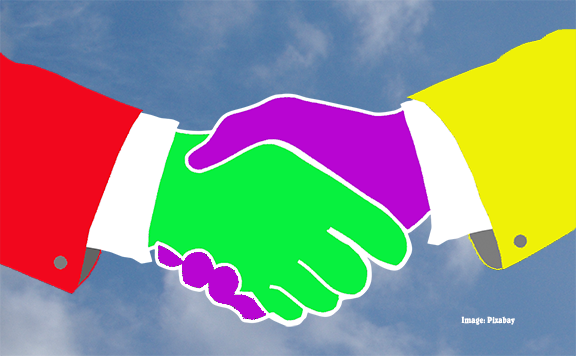 I think a lot of people today don’t really understand what compromise means.

Merriam-Webster has two definitions for the noun….

1a : settlement of differences by arbitration or by consent reached by mutual concessions
1b : something intermediate between or blending qualities of two different things
2 : a concession to something derogatory or prejudicial a compromise of principles

1a : to come to agreement by mutual concession

I’ve always considered that when you compromise, you give a little and you get a little.

The first time I realized that some people don’t understand what compromise means was about 25 or so years ago. My husband’s friend was engaged, so we would do couple things – out to dinner or a movie – and once I was talking to this girl and it became clear that she expected to always get her way in everything. I don’t remember the specifics of the conversation, but I said, “Sometimes you have to compromise.”

To which she replied, “I’ve always compromised before. I’m not doing it anymore.”

So many problems with this.

First, some background. She had dated my husband’s friend years earlier and dumped him with one of those, “You’re too nice” kind of back-handed compliments. She would, from what I was told, regularly call him to check and in and let him know how happy she was with whatever guy she was dating or married to at that point.

It’s my way or the highway.

If you’re not for me, you’re against me.

Obviously, sometimes compromise is more complicated than picking a color you can both live with. Sometimes it’s giving a little and getting a little. Sometimes, it’s looking at what you’re each trying to accomplish and meeting in the middle.

The problems with some of the legislation that has made its way through Congress over the past twelve years is that neither party wants to make sensible compromise. They won’t even consider working together to find positive solutions to benefit the American people. One side considers it a loss, and an affront to their dignity, if they make any concessions at all. The other side is always completely wrong in their eyes.

That attitude has trickled down to the American people. Or maybe it trickled up to Congress over the past 25 years.

Our elected leaders are supposed to be smarter than a messed up female looking for her next ex-husband (yeah, it didn’t last). They’re supposed to set an example that their constituents can be proud of and emulate. Instead, they play games with American lives and livelihoods, behaving as though it’s their team against the other, and the team that doesn’t win is a big fat loser.

But aren’t we all supposed to be on the same team? Team America?

A win for the team is a win for 328 million people who call this great nation home, and a loss is a nail in the coffin of democracy, equality, and kindness.

Remember the old question, “Can’t we all just get along?”

Getting along means compromising. It means putting yourself in the other person’s shoes and trying to understand their position and believes. It means you don’t always get everything you want, but you get enough to make a difference.

What a world we could have, what lives we could live, what happiness we could experience if we were all willing to meet in the middle.

When I grow up, I want to make movies and write books. Now in my 50s, I wonder if I'll ever really accomplish the dreams of my youth. I have made two short films, one for a college film-making class, the other for an MTV-sponsored contest. I have written short plays that have been produced, and a few short stories and reviews that have been published. I also perform and direct for community theatre. My working life has included stints in local TV news, public relations, retail management and cashier, and for a couple of years, I made the rides go at Walt Disney World. I have two cats and a husband.
View all posts by Taminar →
This entry was posted in Government, My Life, Social Commentary and tagged America, compromise, congress. Bookmark the permalink.