#52Ancestors in 52 Weeks: Back to School

As I delve into these 52 Ancestors in 52 Weeks prompts, I have been mostly focusing on stories about my ancestors. Very rarely, I write about my own life. In part, it’s because I really don’t have strong memories.

Sure, I can recall scenes from movies I saw once decades ago (I recently rewatched “Where Have All the People Gone” – a 1974 TV movie that I saw once when it premiered – and was surprised how much I remembered about it), but my own life is a blur.

For the most part, the first day of school was like any other day. The only one that stands out was in sixth grade, I think. We were in Pensacola and my mother wanted me to go to Brentwood Middle School, but we lived in the district for Workman Middle. She took me to Brentwood and dropped me off. I sat in the office most of the day, waiting for her to pick me up. Some girl came in who had started her period, and that is mixed up in my mind with the time my red pen leaked in the purse I had made from a cut-off pair of blue jeans. 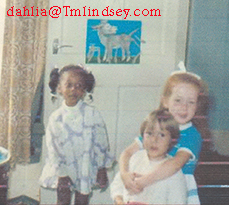 Kimberly, Auriette, and Pauline at a party in Scotland. Note the Pin the Tail on the Donkey poster on the door.

My very first first-day-of-school was not the first day of school at the school. My dad was stationed at Holy Loch in Dunoon, Scotland.  This was in 1970. I had two friends who lived on the same street. Pauline was my Scottish friend. I think her last name was Morris or Morrison. Kimberly Batts was my American friend. They both started school on the first day of school. My fifth birthday, however, was a day or a few days after the cut-off. My mother talked to the headmaster, which is what they call the principal over there, but he was an older man and very the-rules-are-the-rules. My mom, however, looked out for me. She somehow found out what the books were that were being used in first grade and where she could buy them, and she taught me at home. We would ask Pauline and Kimberly what they learned that day, and that would be my next day’s lesson. Then, a couple of months in, the old headmaster retired and a new young man came in. My mother took me in and convinced him that I was up with the class, and he saw no reason why I shouldn’t be allowed to enroll.

Memories of that first year of school:

Over the years, I only remember the names of a few teachers. I mean, there were many years that I went to three different schools because of moving around, so how was I supposed to keep track?

I don’t remember that first grade teacher or any of my second grade teachers. I did, like, half a semester at Pensacola Christian School, where one day I didn’t have any paper with me, and we had a substitute that day, and she made me dig through the trash for something that I could use. Another time, we had a picnic with hamburgers, and we had to go through the line and pick up a hamburger off a metal tray that had been in the oven. I was small for my age, and no one was bothering to move the burgers closer to the edge, and I had to reach way back to get one, and my arm touched the edge of the pan. The burn puffed up probably a quarter inch high, but I didn’t tell anyone because I thought I would get in trouble. I think I fell out of my seat later that day, and the teacher saw it. Anyway, that was a horrible school.

In third grade, I had Mrs. Sadie Craft at Brentwood Elementary in Pensacola, but just for part of the year. I remember her because she was my “Aunt” Sadie, a very close friend of my grandparents. I also attended Brentwood Elementary in Charleston, South Carolina, and that might have been the year I did six weeks in Georgia as well.

I did at least part of fourth grade at Brentwood, Pensacola. My teacher was Mrs. LeMaster. I hit her with my purse one day. Couldn’t tell you why she made me mad, but she did. I think I had a Mrs. Hammond at Brentwood for fifth grade. Mr. Pierce may have been the P.E. teacher’s name. Rita Sorrentino taught music, and we sang popular tunes like “Killing Me Softly.” I liked her.

Back to sixth grade, and when I got to Workman Middle School, they put me in Miss Wilson’s home room. I loved Miss Wilson. She had an end-of-year pool party for us at her apartment complex, and she told us she wouldn’t be back the next year because she was getting married.

I did part of 7th grade in Norfolk, Virginia, and part at Workman in Pensacola. I was seated at one of those big four-students-to-a-table desks in science class and the two other girls at the table were nice at first, then they started ignoring me, or would talk about me like I wasn’t there and say really mean things. I have no idea who they were or what I could possibly have done to offend them, but they hurt me deeply.

Sixth and seventh grade math, I had Mr. Waters. Around that time, I got a calculator, and he would allow the use of calculators, which was very cool.

My friend Diana Reardon took this picture. I’m honestly not sure if it was Virginia or South Carolina. We kept in touch for a while.

Eighth grade, I did part in a Virginia middle school. The bus ride was so long, we would start singing “99 Bottles of Beer” when we left campus and we would almost be done when we reached my stop. I was only there about the first eight weeks of school. Then we moved back to Charleston. I did the rest of eighth grade and ninth grade at Gordon H. Garrett High School. My best friend was another Navy brat named Denise Hosea. People thought we were sisters, especially when we dressed alike for Twin Day. Then my dad got stationed in Panama City. I begged my mother to leave me in Charleston to finish high school. I mean, I was 13 years old. I could take care of myself. But my mother insisted I move with them, and I wrote to Denise, but I never heard from her again.

My mom and I lived in their house in Pensacola, and Daddy lived in our motor home in Panama City, coming home just on weekends and holidays. I went to Washington High School for tenth grade through my senior year. In the summer of 1980, I took P.E. in summer school, so I wouldn’t have to worry about dressing out during the year, and some other smart kids did as well, and they were the best friends I had. They were my age, but because I had started school early, they were the year behind me. I really didn’t have much of a social life, and what little I had was really because of them. Patricia Lee, Astrid Palme, and Sheryl Ward are the names I remember.  At the end of junior year, I tried out for a pep squad/dance group called the Pom Kats and I got the call that I actually made it and that I’d be notified when rehearsals would start. I was so excited. I even had a pom-pon girl on my class ring. Only, I never got the notice about rehearsals. It was a new thing, and I thought that they must have just decided not to have it after all. So imagine my surprise and how hurt I felt when they performed at the first pep rally.  I don’t know if they tried to call and no one was home or what. I never followed up. I mean, I had no proof that I really made the team, just my memory of the phone call. I wear my class ring to reunions, but it still hurts to see that pom-pon girl on the side of the ring.

Those last couple of years, I tried really hard to belong. I joined clubs, but I was so introverted that I couldn’t even get voted Shyest in the Senior Superlatives.

And no, I didn’t go to prom. But, one of the worst parts of senior year was yet to come. Seniors got released earlier than the other classes, and the yearbooks weren’t in. We didn’t get them until graduation. After we turned in our robes. I got a few signatures, but it was chaotic, of course, and most people were going to graduation parties or beach houses they had all rented together, and that was it.

My mom, by contrast, went to the same schools her whole life. She still keeps in touch with her school friends, the ones that are still living. She went to Brentwood Elementary, first through seventh grade. Eighth grade, I don’t remember which school she attended off the top of my head, but I want to say Clubbs. Ninth through twelfth she went to Pensacola High School. The final year they moved into a brand new building. She graduated with the celebrated Class of 1954.

I guess school’s not supposed to be about having fun and making friends. It’s supposed to be about learning, and I earned my degree, and I learned enough that I was able to get into the local college and university. I finished out by looking through my senior yearbook over on Ancestry, and I was involved in chorus and drama club and some other activities. I suppose I did have some good times, but they aren’t what stand out. Thinking about school generally just makes me sad instead of nostalgic.  Maybe that’s as much to do with me as the experiences I had.

When I grow up, I want to make movies and write books. Now in my 50s, I wonder if I'll ever really accomplish the dreams of my youth. I have made two short films, one for a college film-making class, the other for an MTV-sponsored contest. I have written short plays that have been produced, and a few short stories and reviews that have been published. I also perform and direct for community theatre. My working life has included stints in local TV news, public relations, retail management and cashier, and for a couple of years, I made the rides go at Walt Disney World. I have two cats and a husband.
View all posts by Taminar →
This entry was posted in Genealogy, My Life, Pensacola and tagged Gordon H. Garrett High School, Washington High School. Bookmark the permalink.