I have some catching up to do. “On the Map” is the Week 38 prompt for Amy Johnson Crow’s 52 Ancestors in 52 Weeks challenge, and she posted it September 15th – the day Hurricane Sally was bearing down on Northwest Florida. The storm made landfall in the wee hours of September 16th, and by that time, the power was out at my house, and I was working 12-hour shifts anyway. The power came back on a week later, but internet was out for a few more days. Now things are back to normal, and hopefully I can get posts for week 38, 39, and 40 completed before #41 comes out next week.

When I saw the prompt, I knew instantly what I wanted to write about. My grandparents have a street named after them in Escambia County, Florida. Unfortunately, the sign is long gone. My mom and I drove back there not too long ago; the area is overgrown and there’s just one little house, not in great shape, still back there.

Cook’s Court still appears on Google Maps, even though the street sign is gone.

When my mom was little, in the early 1940s, Hoyt and Willie Cook lived at 4103 North Palafox Street, about four miles north of downtown Pensacola. They bought quite a bit of property in that area, and my grandfather built several houses that they rented out. Only that one, in the overgrown field down Cook’s Court, still remains. Yes, I still need to get a photo of it.

The map below is from MapQuest. it doesn’t even show Cook’s Court, but I have labeled some of the locations important to my family. The red dot is 4103 N. Palafox. While my dad was stationed in Scotland, my grandparents sold the house and it was moved to a different location. They sold the property separately, and that’s now the address of an auto painting business. The green dot is where Willie Cook’s mother lived. My mom and dad built a house right behind her on Mason Lane, where mom still lives today. The blue dot is Brentwood Elementary School, where my grandparents taught, my mom and her brothers went to school, my mom did some teaching there before my dad went back in the Navy, and I went to school there, off and on. 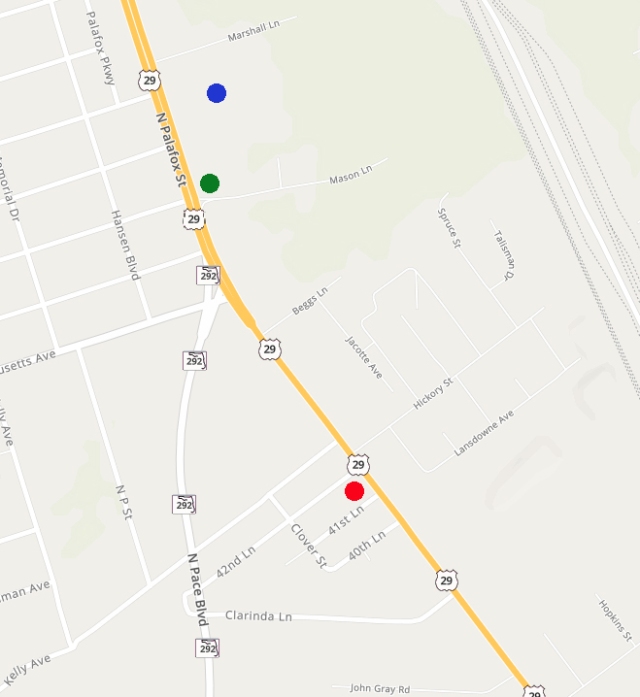 This is the neighborhood that’s always been home.

I have wondered, if I were to contact Escambia County and tell them the street sign is down at Cook’s Court, would they bother replacing it, with only one old house down the lane? I sure would love to see my family’s name on a street sign. Even seeing it on Google Maps is pretty cool.

As of last year, an oak tree planted by my mom’s youngest brother Howitt in around 1953 was still standing by where their home used to be. I have not been by there since Hurricane Sally to see if it survived the storm.

A tree planted by my mom’s youngest brother when their house was on the site.

When I grow up, I want to make movies and write books. Now in my 50s, I wonder if I'll ever really accomplish the dreams of my youth. I have made two short films, one for a college film-making class, the other for an MTV-sponsored contest. I have written short plays that have been produced, and a few short stories and reviews that have been published. I also perform and direct for community theatre. My working life has included stints in local TV news, public relations, retail management and cashier, and for a couple of years, I made the rides go at Walt Disney World. I have two cats and a husband.
View all posts by Taminar →
This entry was posted in Genealogy, My Life, Pensacola and tagged #52ancestors, Cook, family history, Florida, Stevens, Street Names. Bookmark the permalink.